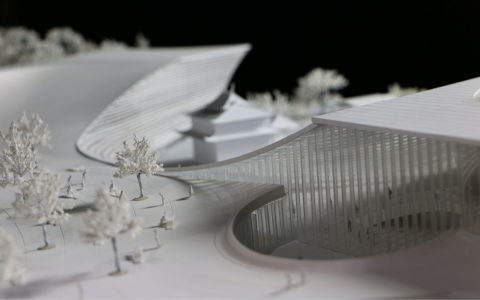 The design of the Xiamen Music Center envisions a world-class performance destination inspired by the island city’s dramatic topography and the harbor in which it sits.

Adjacent to a historic nineteenth century military fort, the Music Center acknowledges the site’s history and landscape within a new spatial choreography. The embrace between mountainous landscape and the built environment and between the undulating shoreline and corresponding profile of water define the city of Xiamen and shape the design concept.

The building is spliced into the natural topography, to reduce impact on the environment, respectfully engage the earth and thoughtfully build upon the historic context. The moderately sloped site is carved away toward the shoreline to connect the building and patrons to the shore. A large sweeping gesture creates the architecture and evokes dramatic associations: a powerful wave reminiscent of the sea, an acoustic pressure or musical crescendo, a series of contour plates that establish the landscape, the profile of traditional Chinese rooflines. The curving form is simultaneously façade, ground and civic stair that organize the entire visitor experience. 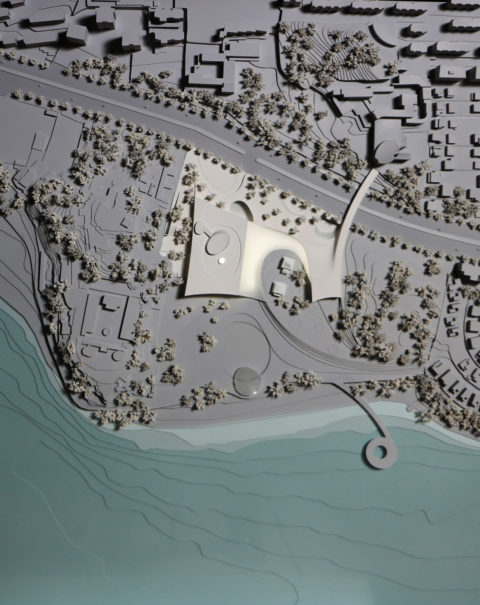 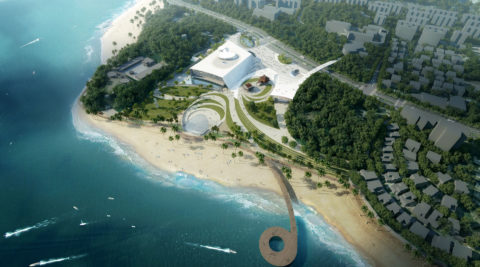 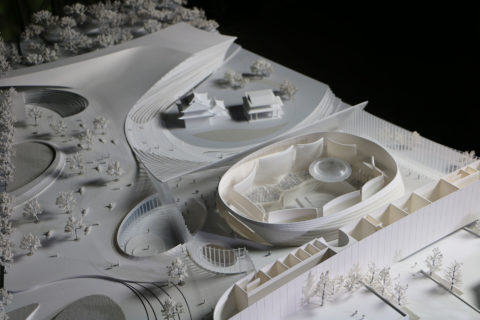 A public plaza at street level provides access to the concert hall lobby or an adjacent recital hall. An intermediate platform establishes a distinct place for an existing Buddhist temple, which is accessed by a stair that is integrated into the curvilinear façade. The stair treads, which evolve into solar shading for the interior spaces behind, continue down toward an outdoor concert shell at the beach. The grand stair becomes a civic event: an amphitheater, a processional sequence to a performance or to the temple precinct, an open accessible public space akin to the Spanish Steps. 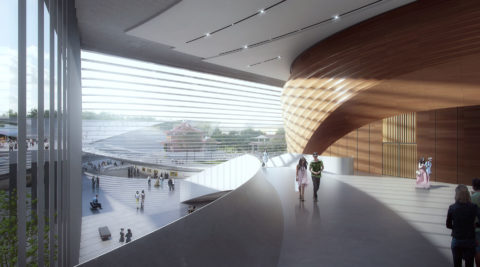 The sweeping façade shapes the dramatic interior space and is a counterpoint to the free-standing central concert hall form. The wood cladding of the 2,500-seat vineyard-style hall references weathered rocks or driftwood found along the shore. A series of convex forms articulates the ceiling and wall panels, enhancing the acoustic performance by dispersing sound throughout the hall and providing visual continuity with the exterior forms. A recital hall, musical education space and other academic functions complement the concert hall and are dedicated to the music program of Xiamen University. A pedestrian bridge that grows out of the recital hall form connects the Music Center to the university campus across the street.

Together, the architectural forms embody the concept of musical space, where the collection of distinct spatial instruments interacts, counterpoints and unifies into an overall composition. The design thereby transcribes the way music is experienced over time into the physical realm: a sequence of distinct environments unveiled in a unique choreography and combined with distant and intimate views to capture the character of a place.

The design is the product of a six-week design competition for Xiamen City Municipal Planning.