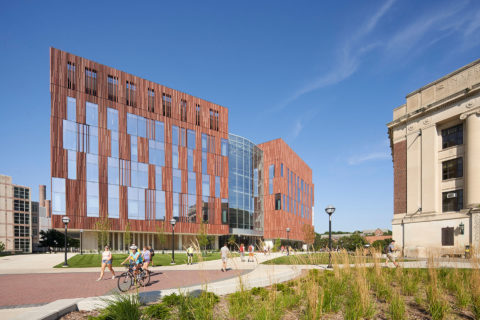 First of its kind facility integrating student and faculty research with state-of-the-art science education and an interactive museum to engage the public and revolutionize life science research, discovery and communication

ANN ARBOR. Michigan, April 11, 2019 – Today, the design firms of Ennead Architects (Design Architect) and SmithGroup (Architect of Record) celebrate the grand opening of the University of Michigan’s new Biological Sciences Building (BSB). Characterized by a transparent, open-lab concept that combines cutting-edge scientific research and the new home of the U-M Museum of Natural History, the BSB establishes a new paradigm in science education for a university that is widely recognized as one of the nation’s leading research institutions.

Located on the university’s main campus in Ann Arbor, Michigan, the 312,000-square-foot facility creates a new home for the departments of molecular, cellular, and developmental biology; ecology and evolutionary biology; and the teaching collections for its paleontology and zoology museums. The unique merging of the BSB with the newly re-envisioned Museum of Natural History gives the larger community access to the research coming out of these programs.

The facility’s layout and design are a dramatic departure from traditional rectilinear academic research environments that are siloed by department and closed off from the public. BSB encourages collaboration and puts science on display in fresh new ways.

“Our team was passionate about integrating the museum into the facility from the onset of the project, not treating it as a separate entity," stated Jeff Hausman, AIA, Principal-in-Charge and Director of SmithGroup’s Detroit office. "We wanted to give scientists an opportunity to showcase their current research efforts and share what they're working on each day.”

“The building itself was designed to put science on display,” said Todd Schliemann, FAIA, Design Partner at Ennead Architects. “The unprecedented coupling of an academic biological science program with a museum of natural history brings research, teaching and public exhibition space together, opening everything up to a much wider audience.”

The form of the BSB creates public views deep into the facility. The five-story structure is comprised of three terracotta and glass-clad towers connected by two large and transparent atria that bring light deep into the laboratories and public spaces. These atria act as vitrines for large-scale exhibits, curated by the museum, which can be seen at a distance, alongside of the research on the upper floors. Recalling a ‘cabinet of curiosities,’ the building form serves to showcase the institution’s mission to educate the public through these monumental views into the collections and research environment.

Designed to accommodate 90 principal investigators and their teams, the BSB includes 84 wet and dry research labs, classrooms, administrative offices, breakout spaces, and Darwin’s cafe. The first floor also houses a team-based, active learning classroom that allows students and professors to reconfigure the space to support a variety of hands-on learning objectives. The space is equipped with three interactive projectors and dozens of monitors to support collaborative group projects and give students the opportunity to showcase current projects.

Researchers and staff are grouped into small, interconnected “neighborhoods” that bring together complementary fields of study. Teams are assigned to one of 11 neighborhoods located throughout the towers and have access to a wide range of shared amenities, such as computational living rooms, state-of-the-art plant growing rooms and chambers, specimen artifact collections, sophisticated imaging equipment, and one of the largest university aquatics facilities in the U.S.

"We set out to create a facility that inspired people to excel at their work,” said Susan Monroe, Capital Projects Manager, University of Michigan College of Literature, Science and the Arts. “Happy people lead to good science.”

The merging of the BSB with the university’s Museum of Natural History – which opens to the public on April 14 and is configured as a series of public galleries and exhibits that allow visitors to wind their way through the first and second floors of the BSB – gives the community access to longtime favorite exhibits, such as a pair of mastodon skeletons. New museum amenities include a 60-seat, state-of-the-art planetarium and domed theater; a multimedia science forum which will bring visitors face-to-face with scientists and researchers, investigate labs for hands-on learning, and many interactive exhibits. On the main floor, a glass-enclosed Fossil Prep Lab – one of two Science at Work exhibits -- demonstrates the university’s commitment to sharing research activities with the public. The interactive space enables visitors to watch scientists prepare fossils for study and display. Guests are also invited to utilize a two-way intercom system to engage with researchers and ask questions about the work that is underway. Visitors can also enjoy a similar experience at the Biodiversity Lab, located on the second floor of the BSB.

"By making science more accessible, we are encouraging visitors, young students in particular, to explore science in a new way," said Jarrett Pelletier, AIA, Project Designer at Ennead Architects. "We’re excited to think that this kind of interaction and outreach can have tremendous ability to inspire next-generation scientists," adds Mark Potter, AIA, Project Manager for SmithGroup.

Poised at the threshold between the historic central campus and the modern science and medical campuses to the north, the BSB creates a dramatic gateway and defines a new life sciences district. Taking cues from both campus neighborhoods in color, texture and scale, the building’s fenestration presents the BSB with a singular and unique identity that softly transitions between the two. Adjacent to U-M’s Life Sciences Institute, designed by SmithGroup, and the A. Alfred Taubman Biomedical Science Research Building, designed by Ennead Architects, the Biological Sciences Building completes development of the university’s life science precinct – an effort which began more than two decades ago.

SmithGroup (www.smithgroup.com) is one of the world’s preeminent integrated design firms. Working across a network of 14 offices in the U.S. and China, a team of 1,300 experts is committed to excellence in strategy, design and delivery. The firm partners with forward-looking clients to maximize opportunities, minimize risk and solve their most complex problems. SmithGroup creates exceptional design solutions for healthcare, science and technology organizations, higher education and cultural institutions, urban environments, diverse workplaces, mixed-use and waterfront developments, and parks and open spaces.

Ennead Architects (www.ennead.com) is an internationally-acclaimed, New York-based studio with offices in New York City and Shanghai. Renowned for its educational, cultural, scientific and governmental building designs that authentically express the progressive missions of their institutions and enhance the vitality of the public realm, Ennead has been a leader in the design world for decades. Recipient of the prestigious AIA NY Medal of Honor, the Smithsonian Institution-Cooper Hewitt National Design Award and the National AIA Firm Award, as well as numerous design awards for individual buildings, the studio has a portfolio that is diverse in typology, scale and location and includes new construction, renovation and expansion, historic preservation, interior design and master planning. Ennead’s collaborative process is rooted in extensive research involving the analysis of context, program, public image, emerging technologies and a commitment to sustainable solutions.