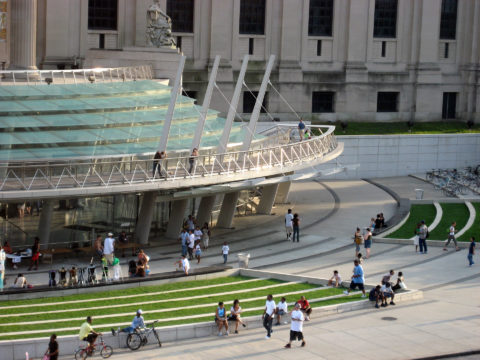 Architectural Digest includes Brooklyn Museum Entry Pavilion and Plaza in their list of the eleven best examples of when modern and historic architecture come together to produce something better than the sum of their parts.

With roughly 1.5 million works, the Brooklyn Museum houses New York’s second largest art collection (the Metropolitan Museum of Art holds the top spot). Completed in 1895, the Beaux-Arts building was designed by McKim, Mead and White. (Note: McKim, Mead and White was the same firm responsible for the design of the city’s original Pennsylvania Station, and the arch in Washington Square Park, among other structures.) In 2004, a beautiful $63 million glass entrance was added to greet visitors. Designed by Ennead Architects (previously known as Polshek Partnership), the 15,000-square-foot pavilion provides a striking juxtaposition to the more traditional backdrop of the museum façade.