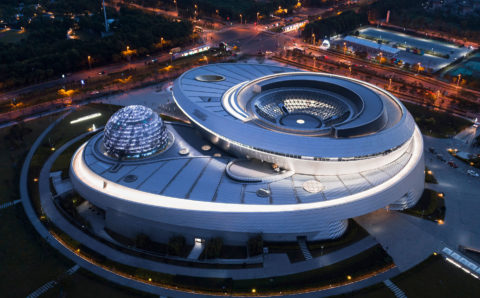 Dezeen and New Atlas have included Shanghai Astronomy Museum in their 2021 year end round up of top architecture projects.

An excerpt from Dezeen’s round up:

Designed to reflect the shapes and geometry of outer space, the world’s largest astronomy museum in Shanghai has no straight lines or right angles.

An excerpt from New Atlas’ round up:

The Shanghai Astronomy Museum by Ennead Architects is a stunning astronomy museum in China that’s also the world’s largest. The building’s curving design is actually inspired by the cosmos and parts of it function a little like an oversized sundial, marking the passage of time.

Its huge 420,000 sq ft (roughly 40,000 sq m) interior hosts a mixture of temporary and permanent exhibits, a solar telescope, an observatory, plus viewing points and a planetarium theater hosted in a large sphere that appears to float.

Click here to read New Atlas’ complete round up of the best buildings of 2021.