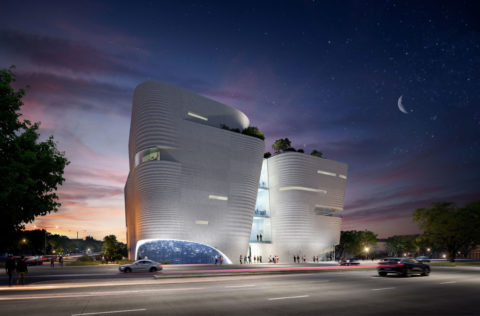 “Thanks to the creativity and hard work of our teams at Ennead and Kahler Slater, the new Museum building will be an iconic, one-of-a-kind monument to Wisconsin and its people,” said Katie Sanders, MPM Chief Planning Officer. “Different from most creative processes, this design was developed as a result of input from thousands of people from both far corners of Wisconsin and right here in the Haymarket neighborhood, paired with inspiration drawn from a tour of the entire state.”

Heavily influenced by the ecological histories of Milwaukee and Wisconsin, the design of the new museum will be reminiscent of the geological formations in Mill Bluff State Park, emblematic of the region’s diversity of landscapes formed by the movements of water through time. The convergence of Milwaukee’s three rivers — the Milwaukee, Kinnickinnic and Menomonee — inspire the museum’s interior commons, with entrances welcoming visitors into a dynamic gathering space.

The building will be approximately 200,000 square feet, including five stories; the first floor will house an open museum commons atrium where visitors and the public can gather and bask in natural light from a sunlit lightwell; the four upper levels of exhibit space — which are currently in the schematic design phase led by Thinc Design — will be offset from neighboring floors in the Museum’s collections storage lobe, allowing visitors to peek into and preview different exhibit floors and collections that are not part of specific exhibits or dioramas. The new museum will also include two gardens, located near the entrance to the museum and on the rooftop, providing an opportunity to bring native plants back into Milwaukee’s urban environment. Offsite, a separate 50,000 square foot storage space will house additional collections.

Groundbreaking for the building is slated for late 2023. The new Museum is due to open in 2026.