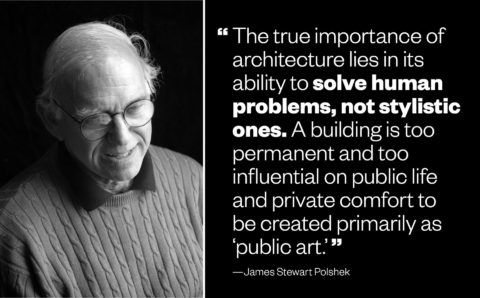 James Stewart Polshek FAIA, internationally renowned architect, former Dean of the Columbia University Graduate School of Architecture, Planning, and Preservation, and founder of Polshek Partnership (the precursor to Ennead Architects) passed away on September 9, 2022 at 92. His distinguished six-decade career has left an indelible impact on the practice of architecture.

As a designer, educator, and civic advocate, James Polshek advanced a singular vision, based on his core belief in the sustaining power of an architecture that synthesizes ethics and aesthetics. For Polshek, pragmatism and idealism were co-equals. From his earliest residential projects, solving human problems and reinforcing the optimistic aspects of the art and craft of building permeated his work. These foundational values drew generations of talented and like-minded architects to the office, defining a studio culture of collaboration and a practice model informed by social responsibility and environmental stewardship, which continues forward with new generations at Ennead.

Born in Akron, Ohio in 1930, James Polshek was raised in a home shaped by his parents’ commitments to social justice, which seeded his approach to architecture. He entered Case Western Reserve University in 1948. His pursuit of medical studies was short-lived; nevertheless, healing was a cornerstone of his design philosophy and practice. He cited a Frank Lloyd Wright-inspired house in an Akron suburb and the design’s implicit and confident critique of the historically derivative eclecticism of the neighboring houses as a turning point.

At Yale University School of the Arts (M. Arch., 1955), Case Western Reserve’s Beaux Arts classicism collided with Modernism. The non-conformist George Howe was Dean of the Department of Architecture; Eugene Nalle’s polytechnic rigor defined the first two years of the four-year curriculum; Louis I. Kahn was Polshek’s studio critic in his final year. Polshek described Yale as an “incubator”: the expansive curriculum and diverse faculty presaged both his deanship at Columbia University and the culture of his practice.

He explored developments in socialized housing in Denmark on a Fulbright Fellowship to the Royal Academy of Fine Art in Copenhagen (1956-57). The unity of art and craft and the interdependence of architecture and context that marked both the modern and vernacular design cultures of Scandinavia would find expression in his later work.

Drawn to academia by the dual opportunities to affect aspiring architects and to advance the notion of architecture as a powerful agent for change, Polshek served as Dean of the Columbia University Graduate School of Architecture, Planning, and Preservation for fifteen years, from 1972-1987. His earlier stints as studio instructor under the deanship of Charles Moore at Yale and John Hejduk at The Cooper Union underscored the value of opposing perspectives.

Columbia University President William McGill appointed Polshek Dean in 1972 – a tumultuous moment marked by the threat of nuclear weapons and the continuing Cold War, the Civil Rights Movement, the aftermath of late-1960s upheavals on college campuses, and the oil crisis. Polshek led the school’s resurrection, creating a fertile field for progressive academic discourse: he assembled an ideologically diverse faculty, with whom he developed a socially relevant curriculum; he created degree-granting programs in planning and preservation; and he established the interdisciplinary Temple Hoyne Buell Center for the Study of American Architecture. Significantly, under his deanship, the school’s name was expanded to acknowledge planning and historic preservation as distinct disciplines.

Asserting the interdependence of academia and practice in professional education, Polshek negotiated the creation of a new position – Special Adviser to the President for Design and Planning – as a condition of his accepting the deanship. In that capacity, he elevated stewardship of the historic McKim, Mead & White campus to an imperative and assumed a critical role in reviewing designs for contemporary interventions.

James Polshek’s lasting professional legacy demonstrates the sustained relevance of foundational precepts to design. From his early projects in Japan to his final works, principles of humanism were interpreted as recurring design intentions: protection of the natural environment, improvement of the urban fabric, and respect for cultural memory. These intentions were, in turn, manifested in the formal elegance, clarity, and technical excellence of the built projects, each an expression of unique identity.

Following his graduation from Yale, Polshek worked in the offices of I.M. Pei and Ulrich Franzen. A townhouse renovation and the design of a weekend retreat for two scientists led serendipitously to two projects, which he called “Cinderella commissions.” From 1962 to 1964, Polshek and his family relocated to Japan, where he designed a textile research laboratory and a pilot plant, which attracted international attention. Upon his return to New York City, he established James Stewart Polshek, Architect. His early projects, including a series of small pavilions, owed much to experiences in Japan and Scandinavia.

The diversity of approaches, intergenerational collaboration, and creative discourse that Polshek fostered at Columbia found its analogue in the design and evolution of the Polshek Partnership as an open field for architectural experimentation and invention. The office that Polshek began in 1963 as, James Stewart Polshek Architect evolved through multiple iterations. Following his retirement in 2005, the firm transitioned in 2010 from Polshek Partnership to Ennead Architects.

For Polshek, theory needed be realized with action. He wrote and spoke extensively about architecture as an agent for social change and about the ethical and moral obligations of the architect. Emblematic of his optimism and his acute sensitivity to architecture’s impact on our cities and landscapes and on our common culture was his civic engagement.

Following the model of the anti-nuclear Physicians for Social Responsibility, in 1981, he and colleague Sidney Gilbert founded Architects/Designers/Planners for Social Responsibility to promote nuclear disarmament and the primacy of social services over excess military expenditure. Since the 1990s, the organization focused much of its effort on ecologically and socially responsible development; in 1993, ADPSR received a national AIA Institute Honor award for “its strong resounding voice for social and political justice.”

In 2006, Mayor Michael Bloomberg appointed Polshek to the New York City Public Design Commission. The only architect among eleven commissioners charged with ensuring excellence and innovation in designs for city-owned properties, Polshek critically reviewed countless projects during his tenure.

Towards the end of his career, his involvement with Franklin D. Roosevelt Four Freedoms Park on Roosevelt Island was of great personal importance. In 2005, William J. van den Heuvel spearheaded the effort to build the project, designed by Louis I. Kahn in 1973. Polshek was the interpretive consultant, realizing the work of one of his early inspirations and teachers.

James Stewart Polshek was highly lauded in the field. He was a Fellow of the American Institute of Architects and received many honors throughout his career, including the Municipal Art Society’s Jacqueline Kennedy Onassis Medal, the Brooklyn Museum's Augustus Graham Medal for excellence in architecture, and election to the American Academy of Arts and Letters and the American Academy of Arts and Sciences. He received honorary degrees from Columbia University, Pratt Institute, Parsons the New School for Design, and New Jersey Institute of Technology. In 2018 he received the American Institute of Architects’ highest honor, the Gold Medal, and in 2019 he was the recipient of the Fulbright Association’s Lifetime Achievement Award. In 2022, he received the American-Scandinavian Foundation Cultural Award.

1955: Receives Master of Architecture, Yale University School of the Arts

1973: Becomes Dean of the Graduate School of Architecture, Planning and Preservation at Columbia University and Special Advisor to the President for Planning and Design

2006: American Academy in Rome, William A. Bernoudy Resident in Architecture

2018: Receives Gold Medal Award from the American Institute of Architects