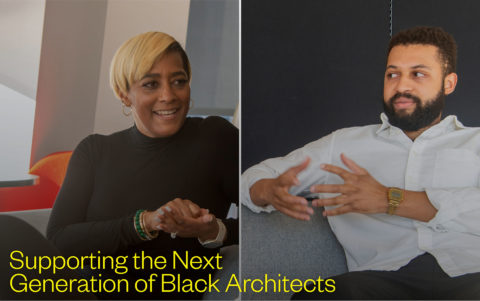 Daniella: Why did you decide to become an architect? Who told you a story about architecture that made you say, this is what I want to do?

Joshua: It was one night when I was six that changed my life. It all started with my mom – she told me she had a vision that I would be an architect. I asked what they did and she said “Well, they do what you love to do. They draw, and they make little models and those drawings and little models become buildings.” As I got older, I explored different possibilities, but everything was always around the periphery of architecture, and I realized this was what I wanted to pursue. It wasn't really about buildings; it was about using my mind to solve problems and make things.

Joshua: Between age six and when I applied to architecture school, there was no talk of architecture or what it meant to be an architect. In my university program I was one of two Black students out of 90 students. Initially I thought that was just a symptom of that environment or geography. Then I became more familiar with the makeup of the workforce in the field – that out of close to 100,000 registered architects, only 2000 of them are Black architects.

Daniella: I got into human resources because I wanted to be able to help positively craft people's career paths, so I think often about the different types of support that individuals need to set them up for success. How do you think this field can support more Black architects?

Joshua: We need to start a lot younger. One of the first and biggest hurdles is people of color considering a design education when they are thinking about building a life. As a kid you know about doctors, lawyers, and businesspeople, but I think architects are very... mysterious. Unless you're around the game, you don't really know. As architects we end up making buildings, but it's so much more than that. There is such a beauty in what we do. We are problem solvers. And if we are really good, the architecture isn’t about the building at all. But in whatever we do, we endeavor to make it beautiful. I think the trick is reaching people earlier to show and convince them of the beauty and potential of what we do.

So, it’s about continuous exposure and about changing the complexion of architecture schools, but then it’s also about supporting people as they get through school and enter the workforce. From there, it’s about mentorship and pathways to promotion, so people can stay and grow in the workforce, get registered, and move into more positions of leadership. Networking opportunities are huge. I joined BlackSpace a couple of years ago and it changed everything to be around people that not only looked like me, but were brilliant, understood the issues, and were able to be a sounding board professionally and socially.

Daniella: What does support for Black architects look like in the workplace?

Joshua: It begins with the message: You belong here. There is space for you here. You are not here to solve a diversity issue. Support involves making resources available and creating an environment where people are not afraid to ask for what they need. Knowledge sharing is so important. At Ennead, people are very open to sharing - there are no gatekeepers here. I don't think I've ever met anyone here that wasn't willing to point me in the right direction to learn.

Daniella: On the HR side, Ennead prioritizes recruitment efforts. I know you have been active in visiting college campuses, including several HBCUs, speaking with students about professional practice. What is your advice to them?

Joshua: There's a Miles Davis quote that says something like, "It takes years to play like yourself." That resonated a lot with me because especially at the beginning, you're just trying to learn how to play. You're trying to figure out how to be useful and valuable, know the things that you need to do in order to be successful at your job, before your personality is really on display and you can essentially play free, to continue the jazz metaphor. It takes time, it takes confidence, and it takes mentors.