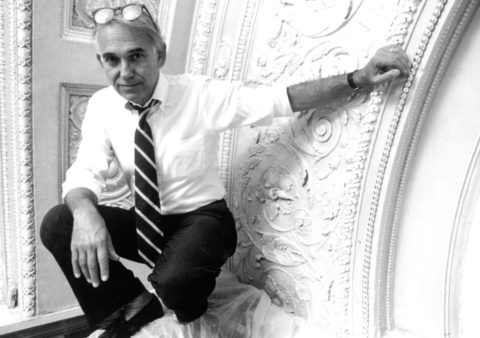 We are deeply saddened by the passing of our longtime mentor and friend, James Stewart Polshek FAIA.

For so many of us at Ennead, Jim profoundly shaped our understanding of what it means to be an architect—that making architecture is an inherently civic act that comes with great social responsibility. He taught us that a building must belong to its community and reminded us of the positive power of public space. These are values that anchor all aspects of our practice. We will forever remember Jim’s insightful and irrepressible spirit. What we have learned from him, we carry forward proudly.

The Polshek family has requested that in lieu of flowers, donations in memory of James Stewart Polshek be directed to the following three non-profit organizations:

“Jim was an accomplished architect. But further, he was a man of conscience. His articulate frankness, his disarming sense of humor, his energy and quick step, his inspirational ability to see a clear road beyond immediate limitations, and his deeply personal concern and responsibility for all of humanity were the fuel for his architecture. The label he chose for his work is telling—contextual and socially responsible—but architecture was only part of his story. It is the man that we all remember first. Through his family, friends, colleagues, clients, and those that may have met him only once, his values, passion and incurable optimism remain with us. And of course, through its timeless influence on so many, his architecture still speaks to us of what we all hold dear—each other.”
— Todd Schliemann FAIA, Ennead Partner

“Jim was passionate, articulate, charming, relentless, a teacher, an advocate, a rabble-rouser, a ‘disrupter’ before anyone knew what that was. He was ahead of his time, always. While his peers were pre-occupied with the many “isms” of form-making, Jim did not care about trends. From the start, he was interested in architecture as a social construct, a “healing art” as he called it. Preservation, sensitivity to context, social responsibility, community engagement, respect for the environment—these were his touchstones when no one else was talking about them; now everyone is.
Jim remains an agent of change and a leader, having educated and shaped generations of architects, all out in the world working to make a difference because of what he practiced and taught. That, beyond any one building, is what I am sure he would regard as his greatest achievement.”
— Richard Olcott FAIA, Ennead Partner

“When I think of Jim, I come back over and over to the very simple values of duty, honor, service, and empathy. They have fallen out of the public discourse these days, but never with Jim. He lived and led every day with the humanism embodied in these values. What greater tribute to Jim than to know that the collective character of this practice and all of us who have ever passed through it over the years will remain dedicated steadfastly to the humanism he lived and shared with us by example. You live on in all of us. Thank you, Jim!”
— Kevin McClurkan AIA, Ennead Partner

“Jim’s passing signals the loss of a singular architect who practiced his discipline as a true humanist. The betterment of the world was at the heart of everything Jim did and stood for. Farewell teacher, mentor and friend.”
— Don Weinreich FAIA, Ennead Partner

“Jim was an uncannily affable and generous soul. With a stubborn and courageous heart, he always held on to the social mission of architecture. When his peers were seeking highly personalized and muscular formalism, Jim was asking ‘how can architecture heal the city, society, and the planet.’ While the field has broadly returned to seeing architecture as a force to improve humanity and ecology, these values were foundational to him from the start, and he never abandoned them over 60 years of practice. This is his great legacy, and he is a standard-bearer for us all.”
—Tomas Rossant, Ennead Partner

“Jim indeed had a magnificent life—one of major achievements, accolades, and lasting impacts on the world. These were all a celebratory part of who he was. But for those of us who had the great fortune to work closely with him daily, it was his deep personal conviction to improve the human condition and the devout belief in the power of architecture to do so which we all rallied behind. His vision helped to fuel our practices and our lives with purpose and fortitude. It is this foundational ethos that lives on today among his students, peers, partners, and all whose lives he touched.”
— Thomas J. Wong AIA, Ennead Partner

“As a young architect it was very important to me that I join a firm committed to building projects with social impact that strengthen our communities. Jim did that and more. He recognized to be truly successful at this we have to support and celebrate every voice of a community. Thank you, Jim for your legacy.”
— Molly McGowan AIA, Ennead Partner

“Jim was my graduate school dean at Columbia University GSAPP. As an educator, as well as a practitioner, he inspired all architects to pursue civic responsibility and truth in the built environment. His curiosity and commitment to excellence set the bar for generations to come.”
— Peter Schubert FAIA, Ennead Partner

“Jim was most of all, a unique and very special person, who also happened to be an extraordinarily talented and conscientious architect and educator. He was a loving family man, devoted to his wife Ellyn and his children, Peter and Jenny. To me, for over 56 years, he was a mentor, a colleague, a friend, and a Partner. His eyes were always focused on the future. His heart and his mind were always on the side of the “angels”. He leaves behind a legacy that will endure for many generations to come, and we had a lot of fun along the way.”
— Joseph Fleischer FAIA, Partner Emeritus

“I remember back in the early 80’s when we were hired to do a masterplan and subsequent projects at Stroh River Place in Detroit, Michigan. Coleman Young was the mayor at the time. At the groundbreaking ceremony, Jim preceded the mayor, who was running for re-election at the time. After Jim’s opening comments, the mayor began by saying: ‘I sure am glad Mr. Polshek is not running for mayor.’ Jim was the ultimate politician, architect, educator, mentor, and friend. He had an extraordinary impact on my life as well as many others and will be missed dearly.”
— Tim Hartung FAIA, Partner Emeritus

“Jim was a one and only! A great architect, educator, and humanist. He was a master of bringing people together to effect change—at Columbia, in the studio and beyond. He led with a smile, a sense of humor and a keen intellect yet was radical in so many ways, fueled by a passion for doing what is right—protecting our civil liberties, our environment, and providing for those in need. He taught us all so much, especially that Architecture and being an architect is both an art and a responsibility. We will miss the sparkle in his eye and his uncanny ability to communicate what IS possible. His legacy will carry on in all of us he inspired.”
— Susan T. Rodriguez FAIA, Partner Emeritus

“Jim was a great human being who built a great office. He will be greatly missed.”
— Duncan Hazard AIA, Partner Emeritus