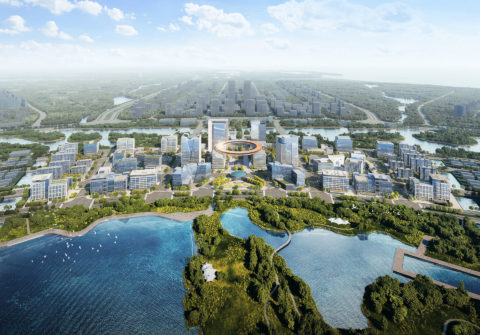 Designed around the central axis that joins the Dishui Lake district in the core of Shanghai, this masterplan will create a new hub for global commerce and serve as the link between two globally iconic and economically important nodes. 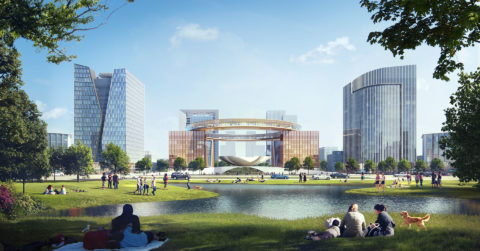 As a business district that will attract some of the world’s most prominent companies, the site occupies an important commercial, political, and civic role, with its design providing a functional area where multinational corporations can optimize business operations, while also creating open spaces for the surrounding communities to enjoy. Reflecting the desire for beautifully designed buildings alongside civic communal spaces, the masterplan envisions a memorable integrated work of urban design, landscape, and architecture.

“Our vision for the Shanghai Lingang Special Area Dishui Lake Financial Bay Pilot Project is to implement an international standard of architecture that reflects China’s role in 21st-century global commerce. The integrated design of the mixed-use site lends itself to a variety of elevated experiences for the local community and tourists alike in the center of this high-profile business district.” 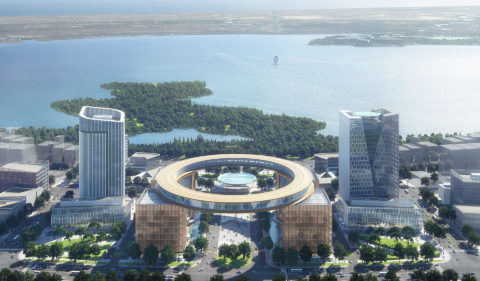 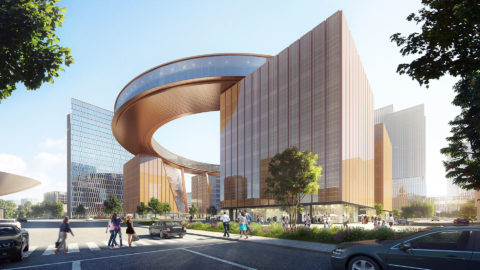 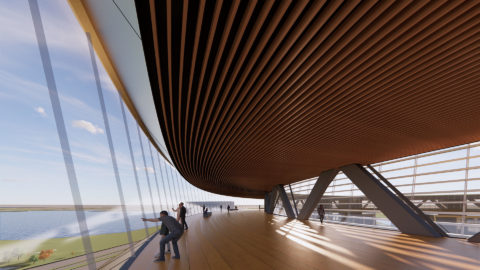 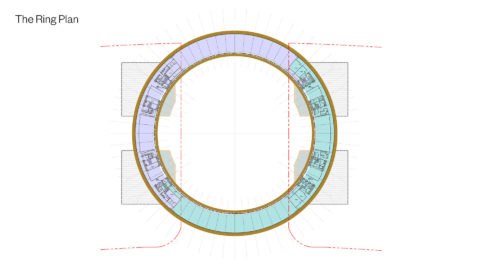 The Ring building serves as the dramatic centerpiece of the Shanghai Lingang Special Area Dishui Lake Financial Bay Pilot Project, symbolizing prosperity and unity. The site radiates from this state-of-the-art circular, cantilevered observation deck and museum with exhibition spaces, supported by four mixed-use towers. The structure will afford 360-degree views of nearby Dishui Lake, Shanghai, and the Pacific Ocean, while providing space for premier cultural experiences. Combining long, curved spans and structural glazing, the ring is an engineering marvel. At night, the ring will be activated with light shows and events. The Ring is supported by four mixed-use towers that will house offices, retail and provide direct access to the Ring itself. 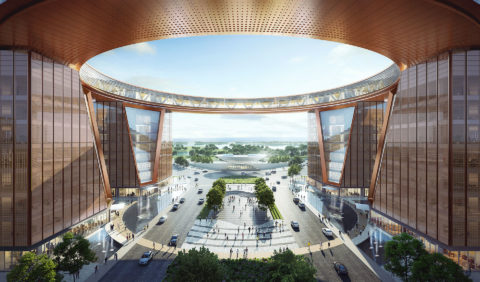 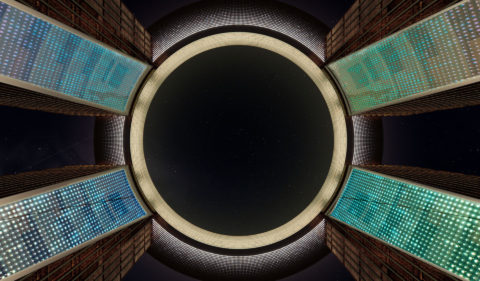 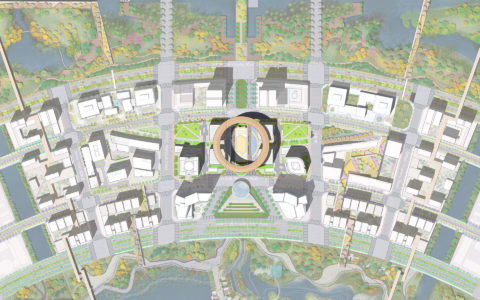 Flanking the Ring building are two office towers—Tower Waterfall and Tower Rhomboid—that will accommodate corporations from around the world, solidifying the Shanghai Lingang Special Area Dishui Lake Financial Bay Pilot Project’s position as a nexus for some of the world’s most important companies. 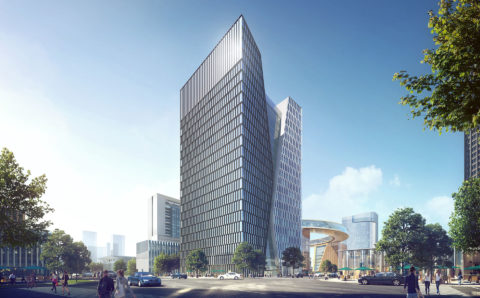 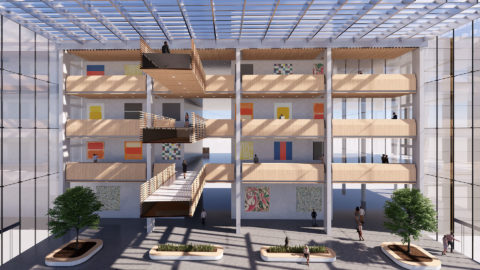 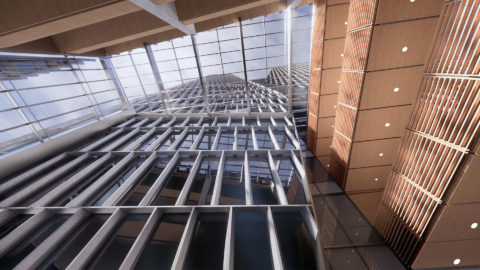 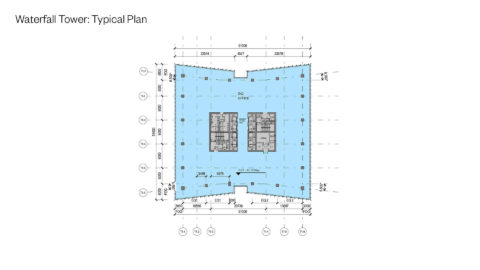 Tower Waterfall, which will house the future headquarters of Lingang Group, is characterized by a gently curving gouge carved into the tower that yield a series of stacked collaboration atrium spaces on the interior. The facade of Tower Waterfall is meticulously designed to offer state of the art user comfort and reduce overall building energy cost. A series of aluminum piers float punctuate the large planes of glass and offers both shading and venting opportunities through a concealed operable window. The checkerboard placement of the towers’ vertical piers allows for a seamless transition to the central atrium facade and visually lightens the weight of an otherwise sizable building. 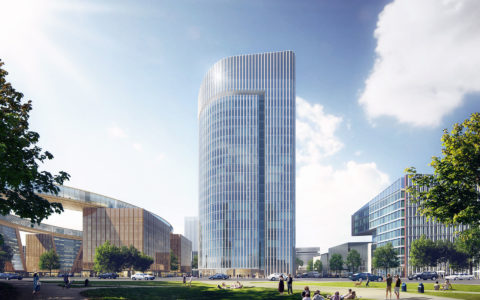 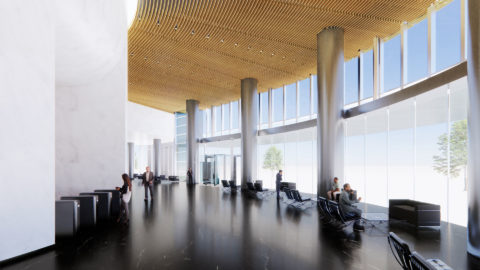 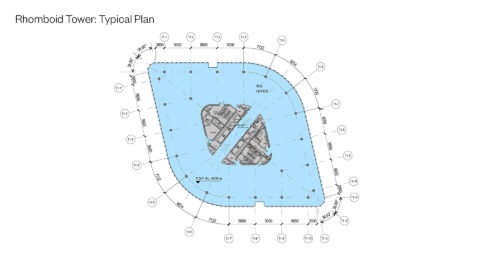 Taking its name from its plan geometry, Tower Rhomboid’s form is derived to maximize the sweeping views to the south and north. At the wider ends of the rhomboid, double height spaces are created to provide multistory connections. The facade of Tower Rhomboid is designed with glass and granite in a sawtooth pattern that effortlessly wraps around the curved corners and distorts the perception of glass versus solid from different vantage points.

A series of unified sub-districts, each with their own unique identity, are included throughout the masterplan and accommodate a variety of functions, degrees of density, and natural and built environments for people to work in and inhabit. The sub-districts include the Quad of Free Trade, Eco and Art Centers, the Mixed-Use Commercial Zone, and the Mixed-Use Residential Neighborhood. Commercial and retail spaces are linked by a collection of elevated, linear parks with local flora; landscaped, pedestrian paths; and a gently curving avenue of interconnected, landscaped buildings called the Financial Crescent, a unique gathering space that unifies the entire district. 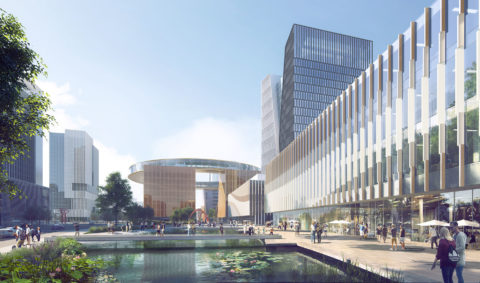 “The ambition was to create a 21st century free trade hub that elevates the profile of Shanghai as a global economic player. The masterplan and designs for individual plots support this vision by establishing a compelling and inspired identity that speaks to the importance of this region.” 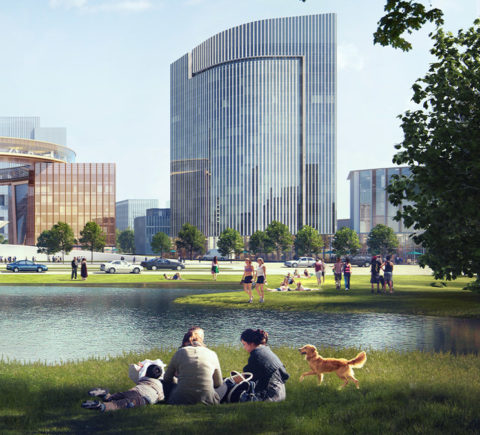 Connections to the natural environment and Dishui Lake are at the heart of the masterplan. Landscaped pedestrian spaces and lush rooftop gardens bring office workers and residents closer to nature. The masterplan is designed as a sponge city, in which the abundant green spaces play a key role in absorbing excess rainwater, helping to mitigate any potential damage from storms and flooding, while also moderating temperatures and reducing erosion. Moreover, with its location on the circular Dishui Lake, the masterplan taking inspiration from natural motifs to inform the design of the site, looking to the forms of and ripples on the lake to create a built environment that reflects the natural world.