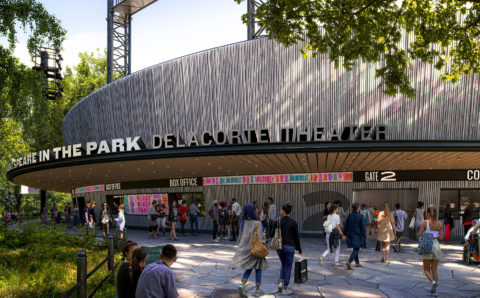 Metropolis' What Will Post-Pandemic Performance Venues Look Like? highlights Ennead's design for the revitalized Delacorte Theater in Central Park as an on the boards projects that employs a strategy to gather crowds around the stage again.

In the article, Stephen PD Chu, Principal and designer of the Delacorte Theater in Central Park, says the revitalization “has only heightened the importance of an iconic outside venue, like Delacorte. The global health crisis suddenly showed the importance of otherwise overlooked aspects of designing a public venue, such as bringing the element of touch to a minimum but to also reconsider accessibility.” The article notes that the 60-year-old Delacorte venue's "limited wheelchair accommodations will be increased with multiple walkway paths for its new phase which is expected to open in 2023. Preserving the rituals of seeing free Shakespeare in the park is a priority for the New York–based firm that previously renovated Public Theater’s downtown flagship."

Stephen goes on to say that “procession is a crucial part of the experience while we eliminate the bottlenecking during exiting." The Delacorte's circulation solution lies in the gentle yet effective gesture of turning the straight form structure to a tilted one. The shift from a cylinder footprint to a cone permits another row of seats on top and conveys a sense of anticipation for what awaits behind the solid wood facade.